Demeke Tirusew (left) concluding his contract at the kebele office to rent and cultivate the land of a female head of household (right).

Land Investment for Transformation (LIFT) has recently made significant strides in developing and delivering a model system for land rental service providers (LRSPs). In this system, professionally trained LRSPs provide landholders and tenants with current market information and handle the entire rental transaction process on their behalf for a small fee, to satisfy the legal and procedural requirements for transacting rental business. The role of LRSPs is to ensure that the financial terms between landholders and tenants are economically fair and socially responsible for both parties and that the rental agreement is upheld with respect to all terms of the contract including the duration. This system aims to replace the current informal and unregulated land rental system where a fair price is difficult to determine and where agreements between landholders and tenants are often broken.

As a first step, LIFT facilitated a workshop in Addis Ababa in January 2019 involving key regional and national stakeholders. The aim of the workshop was to build a better understanding of the LRSP self-employment model among participants by explaining several issues: the systems put in place by LIFT, the expected results and impact of these efforts, the challenges that remain, and the opportunities to further build on this model in the future. In the workshop, participants reached a consensus on the need to formalise rural land rental service provisions rather than rely on the informal verbal agreements currently made between landholders and tenants. These initial discussions led to a series of one-on-one meetings with heads of the federal and regional land use agencies to move the LRSP programme forward.

These discussions led LIFT to undertake field assessments across four regions and organise two regional workshops in May, in Tigray and the Southern Nations, Nationalities, and People’s Region (SNNP), for key stakeholders to decide on a strategy to test the LRSP model in these regions. The outcome of the workshops was to establish pilot programmes for fee-based LRSP services covering two woredas in each region. As a result, 16 LRSP practitioners in these pilot woredas were trained by LIFT in the rules of the land rental market. They also took part in additional stakeholder consultation workshops to better engage in the emerging market sector. LRSPs were then provided with certificates to qualify them to render their services for a fee. In addition to benefiting landholders and potential tenants, this system is thus creating new jobs in rural areas as community members become trained and self-employed as LRSPs.

To date, there are 541 LRSPs trained by LIFT and operating in 32 woredas across four regional states – Amhara, Oromia, SNNP and Tigray – and the total number of rental transactions by landholders and tenants has grown to 15,207. The value of land tenure certificates issued through SLLC has also increased due to the economic benefits from the rental market systems linked to SLLC. Landholders across the four regions have reported to LIFT the benefits of the formal LRSP model over the informal system, in terms of both economic income and tenure security, following the training and operation of LRSPs in their woredas.

In the case of Silas Goesh, a female head of household and mother in Laelay Maichew woreda, Tigray, an LRSP connected her with a tenant and supported them both with proper and adequate rental services, including a formal contract agreement registered through the woreda land administration office. This process made their rental transaction clear, fair and legally binding. As a result, Silas no longer fears dispossession of her land or an unfair share of the income from the tenant who cultivates her land. In her words, “Renting land legally is good. That is, previously we used to experience serious problems. Now there is no conflict over the land we rent. The income [from the formal land rental] is also good … the guarantee as well. It is reliable.” 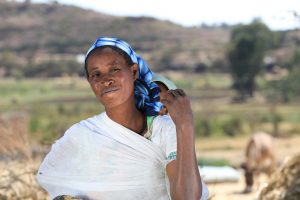 Silas Goesh, a female head of household, says she is benefiting from the legal land rental system both in terms of income and tenure security.

The LRSP model has also been of great benefit from the perspective of the tenant. Demeke Tirusew, a tenant cultivating the land of a female head of household, says that “previously, land rental was transacted based on trust. Because of that, so often either the landholder or the tenant would break the agreement. Since the introduction of the formal system, now neither the landholder nor the tenant can do that – which makes the new practice effective and beneficial for all.” Indeed, woredas across these regions have reported a drop in the number of land dispute cases as more people begin to use the LRSP model.

Despite the successes of the programme so far, not all local people and officials initially welcomed the idea of LRSPs. Some community members, for instance, were wary of LRSPs because they mistook their role for middlemen who would primarily be interested in making a profit without providing a valuable service. LIFT is focused on correcting these misperceptions and changing peoples’ attitudes and behavioural practices by sharing the many positive experiences and feedback from landholders and tenants in discussion forums involving stakeholders and other beneficiaries in the market sector.

In addition to changes in attitude and behaviour at the individual level, LIFT is making progress on the policy front through their engagement with government and media to produce legal changes that will establish payment modalities for LRSPs. In an interview last month with the Ethiopian News Agency, Tigistu Gebremeskel (Director of the Rural Land Administration and Use Directorate at the Ministry of Agriculture) expressed the continued interest and commitment of the government to address the current legal constraints for the LRSP model. He announced that land rental has already been accommodated in the revision process of the federal Rural Land Administration and Use Proclamation currently submitted to the House of Representatives for approval by lawmakers. With this news, the regional land offices are expected to follow suit and approve similar regional amendments through their respective Councils of Representatives.

With these successes in hand, LIFT is confident that the LRSP model will continue to build on this strong foundation of results and serve an ever-greater market in the coming years.

For more information, contact the LIFT communications team at lift@liftethiopia.com